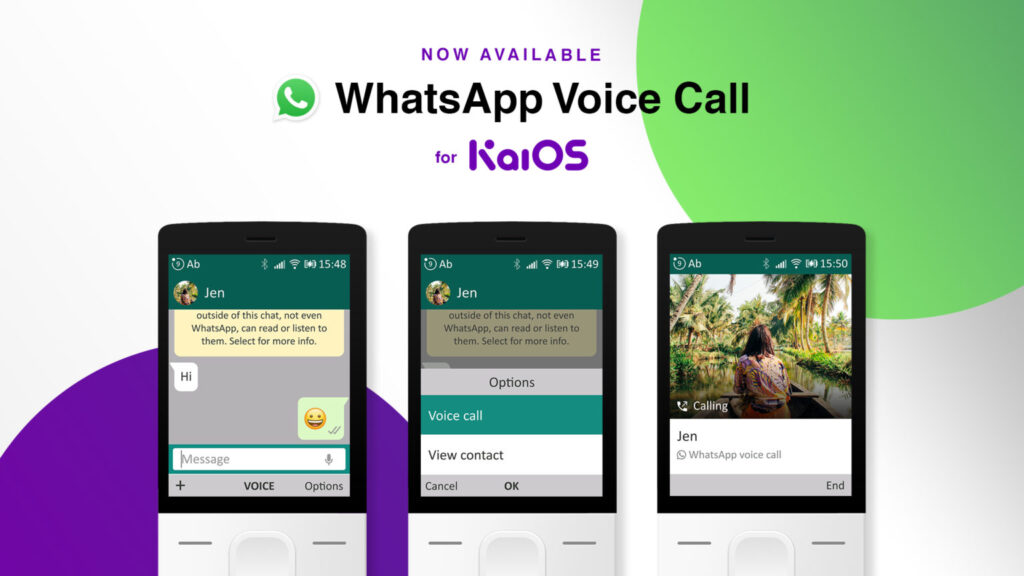 You can now make WhatsApp calls on KaiOS phones

KaiOS Technologies and WhatsApp released an update that enables WhatsApp calls for KaiOS-enabled devices worldwide. The new feature is available to millions of smart feature phone users with the latest version of the app on  KaiOS devices worldwide equipped with 512MB RAM.

With the voice calling feature update, the app now allows voice calls over the Internet using Wi-Fi or mobile data, rather than pulling voice minutes from cellular plans.

How to activate WhatsApp calls on KaiOS phones

To activate the new feature, KaiOS users should update the current version of WhatsApp on their devices by accepting the update notification within the app.  For new devices, the VoIP feature will be included in the latest version of WhatsApp, which is pre-installed upon shipment.

KaiOS Technologies and Africell recently announced that a new KaiOS–enabled smart feature phone, the 4G Vida K242, is now available in Uganda and will facilitate mobile internet adoption across the country.

The 4G Vida K242 has been specifically designed for people who are unable to afford a smartphone and want to go online.  It has a user-friendly interface optimized for first-time internet users. It comes with the world’s most popular apps, such as WhatsApp, YouTube, Google Assistant, Google Maps, and Facebook, and provides access to hundreds of other applications through the KaiStore.

READ ABOUT IT: The first 4G KaiOS device in Uganda by Africell

You can now make WhatsApp calls on KaiOS phones