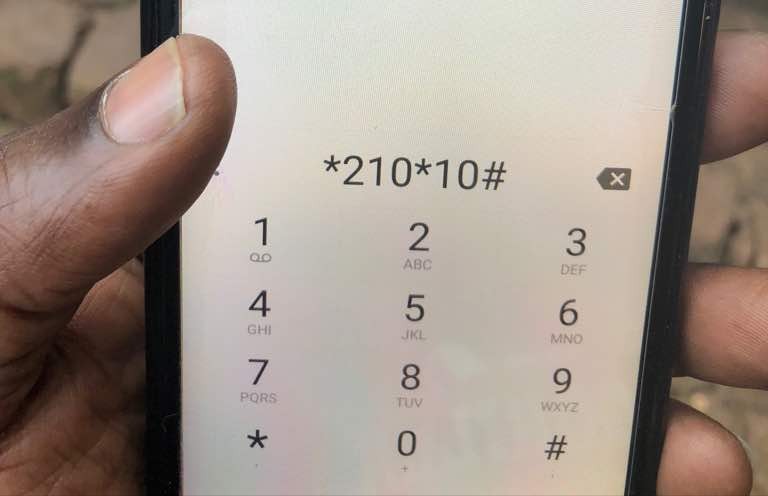 Ten years ago while working in Madagascar on a project that networking and telecommunications giant Ericsson was executing in the island country, Lawrence Zikusoka met Ademola Adebolu. Adebolu, who hails from Nigeria, was working under Zikusoka, who was the project manager.

The duo had been in the IT field for a considerable amount of time and they had observed, especially having worked in the Middle East and Sub-Saharan Africa, that there was a need for a service that would help in uplifting financial inclusion.

In 2014, the first step in their journey of a thousand miles was made: Zikusoka and Adebolu started Global ICT Solutions East Africa Limited (GLICTS), with an intention of addressing technology challenges facing emerging markets that connect to people involved in tourism, migration, trade, travel, remittance corridors and those studying abroad. History repeated itself and Lawrence became the chief executive officer while Adebolu works as the chief technical officer.

GLICTS, after going through the registration process with the Uganda Registration Services Bureau and securing an IP, or Intellectual Property, rolled out its first product, International Airtime Top Up, a gateway that allows users to send airtime both locally and globally.

I recently met up with Lawrence Zikusoka who has been in the telecommunications and financial sector for almost a decade and a half over coffee at Gorilla Conservation Café, another startup founded by his wife, Dr. Gladys Kalema-Zikusoka, a Ugandan scientist majoring in veterinary medicine.

At forty-five, Zikusoka is a ball of fire, and he greets with an ideal business handshake that is accompanied by a sharp look in the eye. When he speaking, he likes gesturing, an element that behavioral psychologists say keeps the listener attentive.

Lawrence Zikusoka studied International Relations for his bachelor’s degree at Syracuse University, New York. A few years later, he returned to the same American city to pursue a master’s degree in telecommunications at the State University of New York.

Despite what he studied and his experience in technology, he likes calling himself a social entrepreneur. Just as any other strategic business partner, Lawrence is calculative and selective with words to avoid sparking off credit wars. And this is reflected when I ask him who pitched the idea of starting International Airtime Top Up. (The company has no official abbreviation; I will use IATU to avoid repeating the full name in this story).

He doesn’t tell me who came up with the idea but he says that they had over the years in the field realized there was a need to offer inclusive ICTs and mobile financial services.

So, by rolling out IATU, he says, they were “just kind of experimenting to see what we could do together.”

“So, we built this international top-up gateway which can combine both airtime and money transfer (it’s only airtime currently) across borders and networks in real time,” he says.

The duo had been working in the Middle East and Sub-Saharan Africa and they had observed that the regions have been affected by war, resulting in constant migrations and refugees. But the movement of people doesn’t mean that they can no longer connect. Humanity is strongly connected and, without relationships, life becomes meaningless, so behavioral scientists say. With their gateway, Lawrence and Adebolu knew that, to a certain extent, they could keep people connected together.

Currently, IATU allows the purchase of airtime via mobile money, Interswitch banks, and a special scratch card. The company has partnered with over 250 mobile operators in 100 countries across the world. According to Zikusoka, these partnerships allow more than 3 billion mobile subscribers to access the gateway.

In Uganda, you can use GTBank, NC Bank, Finca and Opportunity banks to buy airtime via Interswitch. The menu for topping your mobile phone using International Airtime Top Up is offered on the ATM machine. All Interswitch POS terminals also offer the service.

For the mobile money service, they are currently partnering with Airtel and MTN in Uganda. But these two networks, after dialing, *210*10#, can help you buy airtime for any network in Uganda or your friends and relatives abroad. This implies that even if you have one sim card registered on mobile money, you can use it to buy airtime for other sim cards. The steps have been demonstrated in the tweet below.

For 1st time @IntAirtimeTopUp users, see thread of how it works in easy steps. https://t.co/GbVL5wuNyk

It should be noted that airtime scratch cards have been banned in the country, so this is among the solutions you might need to purchase airtime. IATU airtime scratch cards are also available and you can find them in airports and travel companies. Jumia Travel is one of the companies they are dealing with. The cheapest scratch card is five U.S. dollars.

For those who don’t want to use a phone, the service is also available on the company’s website. With the website, you can either decided to use the scratch card or the mobile money service. 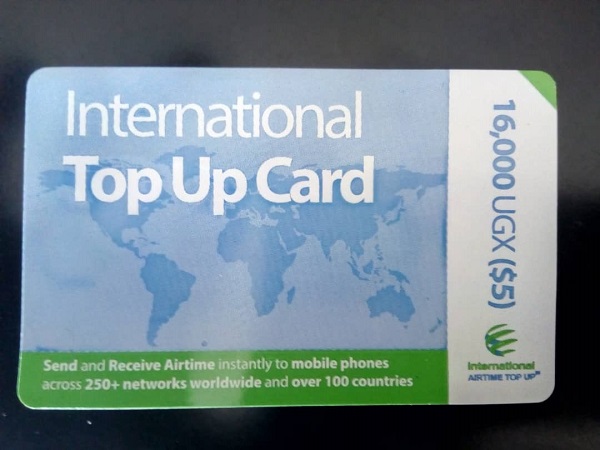 International Airtime Top Up has not yet developed a mobile app. Lawrence Zikusoka says they don’t have an app because they are mainly targeting individuals who don’t have access to the internet. They also want to avoid additional data charges of using the app.

“… We are looking at more low-cost transactions. Yes, app is trendy, app can be made but I think our core is … people that are not necessarily internet users,” he says.

According to a recent Finscope Uganda survey report, only 1.9 million people of the 9.7 million that have mobile phones have access to the internet. When you base on this, his argument holds water.

In the middle of our conversation, Dr. Kalema cuts in, saying that the company, though already making impressive progress, is still trying to study the market and see how best to serve the customer. Lawrence declines to give me figures about transactions they have so far made, but he says: “I mean we would like to say a big figure so we can attract investors. I can just say that we have regular transactions every day. Transactions start early in the morning and end late at night. We have repeat customers who use our service at least twice in a week.”

According to him, most of the customers have liked the gateway because it allows cross-network transactions, which is a common thing in Uganda as people have dual sim cell phones. It also helps traders moving in and out of the country to always transfer airtime to another ‘line’ when in a different country. 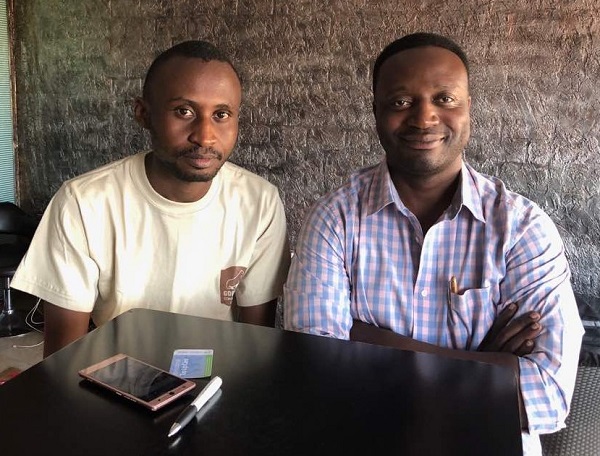 As for mobile money, Lawrence Zikusoka says that it will also be rolled out, but they wanted to study the market using one service first: “…that is in progress…it is in the pipeline. First, we wanted to get customers comfortable with the fact that they can send money as airtime.”

Like any other startup, Lawrence told me that they are still grappling with the issue of raising enough money to hire the best team and improve the service to the best form possible.

But as we go on with the conversation, he confesses that it is something they had not given enough time to since he had been pursuing multiple other projects.

So far, the only support they have got has been from GrowthAfrica, where they were involved in a six-month accelerator program at the Innovation Village in Ntinda, a Kampala suburb.

Other than that, he says, they’ve been self-financing. He, however, says that, now, he’s ready to dedicate time to the project.

As they consider investors, Zikusoka says that they don’t only focus on money, but other value addition factors like whether an investor has access to a market they can’t access. Investors interested in the company are asked to put an equity into the business for a return in stake on IP.

To succeed, most of these FinTechs need telecommunications companies. When I asked Lawrence how he would define their relationship with telcos, he said: “At the end of the day telecom companies want people to use their systems and that’s what we do. We package it in a different way than they do but we still use their systems and services.”

Added, Lawrence: “I would say it’s a cordial relationship, I would say they don’t market us covertly.”

Must read: After scratch cards ban, here are other means of buying airtime

On the startup ecosystem in Uganda, he acknowledges, just as many have said, that the climate is not the best. “It’s very difficult, man. Because it’s like a man pitching to a lady that you want to marry her, it’s very difficult. I would say it’s not very supportive yet. If anything, the worst thing about it is, you go pushing with the idea and before you know it because you didn’t have the money to hire a lawyer someone is already stealing your intellectual property,” he says.

Startups in Uganda face wide-ranging issues including financing, protecting their IPs among other necessities. Different innovation hubs and incubators have been founded to help startups and there have been multiple success stories. The government is also injecting money into the startup ecosystem.

Lawrence, however, observes that some of the startups suffer because the founders are still mentally unprepared for the field, arguing that though they may have a strong technical team, they struggle with marketing and dealing with the challenges of the real world.

“I don’t have any words of encouragement,” he says. “I wish there was an innovation fund.” As part of his future plans, he says that once he becomes a millionaire, he will set up a fund for entrepreneurs and he will be very clear about his intentions: “You give me 1% percent of your company and I support you.”

For the past three years, Lawrence told me, the growth of his company has been entirely organic. There hasn’t been any direct investment in marketing.