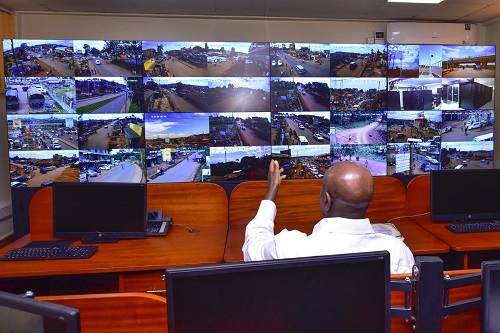 President Yoweri Museveni on Tuesday commissioned the National CCTV Control and Command center of the newly installed CCTV cameras in Kampala and reiterated his government’s commitment to wipe out urban crime.

Speaking at the launch at Natete Police Station in Lubaga Division, the President said the establishment of the National CCTV Control and Command Center indicates that he means business ion keeping Uganda safe.

“We mean cameras, drones, and other means.  All those areas are being strengthened in the towns as they were in the countryside. When we say strengthening, we mean strengthening,” said Mr. Museveni.

He said more technical means will be used in detecting possible crimes.

According to police, the equipment will enable monitoring of most of the crimes ranging from traffic crimes, robbery, and terrorism among other crimes.

The security cameras were installed by Chinese Company Huawei.

In my recent addresses on security, I indicated that the government would undertake this project to fight urban crime. The cameras are now up and running. pic.twitter.com/rEshY0Bdp2

Police said that the ongoing project of installing cameras in major urban centers, key road junctions, and highways of Kampala is aimed at strengthening security surveillance efforts by the agency.

This is the first batch of 900 CCTV cameras under the Uganda Police National CCTV Network Expansion Project around Kampala Metropolitan Area.

A total of 5,552 CCTV cameras are prepared for the nationwide system.

Different teams involving Police IT and Huawei experts have already begun works of laying fiber cables which have so far seen over 81 kilometers covered.

Police are also partnering with urban authorities and other government bodies like Umeme, Uganda National Roads Authority in the advancement of the project especially in managing the effects of cable laying which involves evacuation.

The main National CCTV control and command center will be based at Naguru Police Headquarters in Kampala.