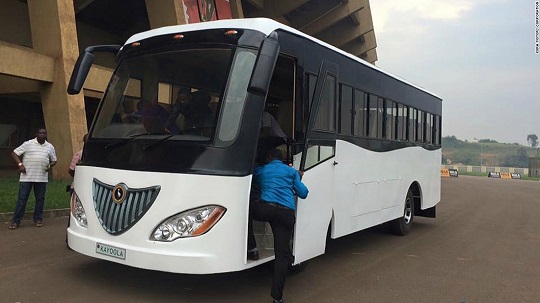 The long-awaited Kayola electric buses made in Uganda will hit the market in March next year.

The buses manufactured by Kiira Motors Corporation will start by plying Kampala-Entebbe and Kampala-Mukono routes, before rolling out to other routes within the city and beyond.

Prof Sandy Stevens Tickodri Togboa, the Executive Chairman of Kiira Motors, said production of the Kayola electric buses is already going on at Luwero industries limited and that the first three buses will be ready by March 2019.

“We found out that Luwero industries limited has the capacity to enable us to develop the electric vehicles we have been talking about “the Kayola”, we do not need to wait for the Jinja site. So, between now and March next year hopefully, we shall bring out probably three buses on the streets and we shall put them on Kampala-Entebbe and Kampala-Mukono roads to reduce the traffic jams on these routes,” Prof Tickodri said.

Tickodri also said progress is being made in developing the Kiira electric vehicles and that the first batch will be out by 2020 and from then on, the company will ensure that there is steady production to meet both local and regional markets.

He said the process has been slow because Uganda didn’t have the necessary infrastructure to start manufacturing the cars, saying progress is being made to achieve the desired target.

“We got stuck for some time because we didn’t have the funds that’s why we had to go political to bring in government to provide funding. Kira motors has delayed to bring out the cars right from 2011 because we do not have the relevant infrastructure on the ground. Right now, we are in the process of assembling vehicles, hopefully by 2020 that assembly plant should be out on the cite.”

Spare parts to be produced locally

Prof Tickodri said while in the initial phases they will be importing some spare parts, their target is to ensure that all parts are produced in the country so that more people can benefit from the manufacturing of the electric cars.

He said the Kiira Motors will only do 15 percent of production works at the Jinja factory while the 85% of the work manufacturing will be done my small and medium scale industries in the country.

“Our interest at Kira motors was not only assembling vehicles, we wanted to add local content so that by the end of the day the raw material that this country has must be added to the content. Our agenda was not only set up an assembly line, import parts and assemble the cars and say we have manufactured the cars. We shall only do 15 percent of the work at our factory, while the rest will be done outside the factory, but in Uganda by Ugandans.”

He said this will give a boost to local industries and build their capacities to engage in manufacturing parts for the electric cars.

Prof Tickodri also said the government should realign the higher education sector in the country with that of science and technology ministry so that innovations by such higher institutions of learning have direct linkage to funding and production.

“We should have configured our sector, the higher education sector to be attached to science and technology, then we would be delivering. But at the moment that split, I have to book an appointment to see what the universities are doing. I think this country must consider, bringing all these sectors under one ministry,” he said.

Though he didn’t name the foreign companies they are working with, Tickodri said the company has signed an agreement with foreign partners to import the initial parts and work together in other technical aspects, which will transform the dream into a reality.