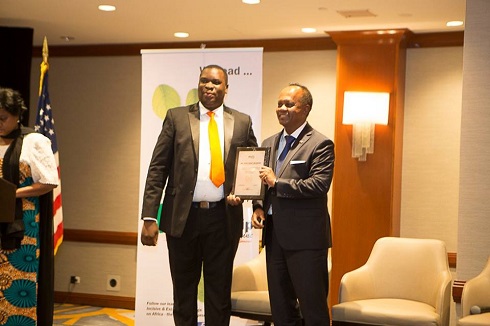 Paul Isaac Musasizi, the chief executive officer of Kiira Motors Corporation, has been inducted into the African CEOs Hall of Fame, the company revealed on Thursday.

The executive, who is at the helm of Uganda’s automobile manufacturing company, was inducted by the acting President of Madagascar, Rivo Rakotovao, at a function held in New York.

At the same event, Paul Musasizi received the African Leadership Medal of Honor in Business.

The African Leadership CEO’s Hall of Fame is an exclusive club of top Chief Executives from across the continent who have continuously exhibited a passion and commitment to diligence, success and transformational leadership in their bid to make Africa prosperous.

Another Ugandan executive that has been initiated into this club is The Uganda Revenue Authority (URA) commissioner general, Doris Akol.

She was inducted in February of this year when she received the African Leadership Magazine (ALM) Person of the Year Public Service Excellence Award 2018.

It focuses “on bringing the best of Africa to a global audience, telling the African story from an African perspective while evolving solutions to peculiar challenges being faced by the continent today.”

Mr. Paul Isaac Musasizi, CEO of Kiira Motors Corporation, awarded the African Leadership Medal of Honor in Business and inducted into the African CEOs hall of fame by Ag. President of Madagascar, HE Rivo Rakotovao, in New York. #MissionVehiclesMadeInUganda

Kiira Motors Corporation or KMC is an automobile manufacturing company in Uganda owned by the Government of Uganda and Makerere University.

The Kiira Electric Vehicle Project evolved from a staff and students’ extracurricular activity at Makerere University, into a national program championing value addition in the domestic automotive industry for job creation and diversification of the economy in line with NDP II and Vision 2040.

This was realised with Government support provided through the Presidential Initiative for Science, Technology and Innovation.

Government and Makerere University established Kiira Motors Corporation a business venture for the Commercialisation of the Kiira Electric Vehicle Project.

Government acting through the Uganda Investment Authority, allocated 100 acres of land at the Jinja Industrial and Business Park to provide a home for the Kiira Vehicle Plant.

In April of this year, the cabinet approved the commercialization of KIIRA EV.

Running on rechargeable lithium batteries instead of petrol, the two-seater vehicle was built at a cost of USD 35,000 (128 million Shillings) and tested on a 4 kilometre test-drive in 2011.

The government wants to inject over Shs120 billion in the innovation over the next four years.

The government has said that it hopes to have its first locally-assembled vehicle by 2020.

In the 2018/19 financial year, Shs 24bn was allocated to KMC to construct Kiira vehicle plant facilities expected to lead to the production of 5,000 vehicles per year.

Construction of the assembly plant is expected to be concluded by 2019.

The government anticipates that the project will create over 2000 direct jobs and about 12,000 indirect jobs.