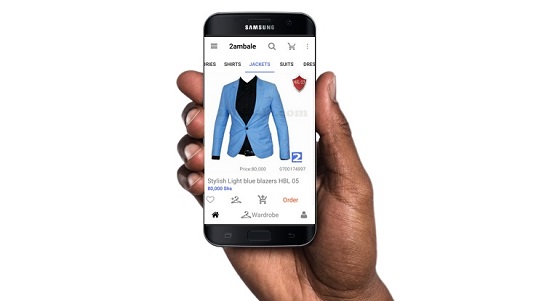 2ambale, which is both a web -and app (Android)-based platform, allows people to buy clothes that are delivered to their workstations within an hour.

Their main target market, according to the chief executive officer and founder Stephen Mutungi, is people between 21 and 35, which is ideally a group of people that you’ll easily find with a smartphone and more technology adaptive.

2ambale has been doing business in Kampala since 2016, and in a recent interview with DisruptAfrica, Mutungi revealed that they were planning on “replicating the same model for cities like Kigali, Nairobi, Mombasa and more across the continent.”

When SautiTech contacted him on which city they would be expanding to first, he said Kigali in Rwanda.

The expansion is beginning in 2019.

According to DisruptAfrica, 2ambale currently gets around 500 orders per month, and they are hoping to increase that to 1,000 by early next year.

Why 2ambale is going to Kigali

Rwanda has currently become one of the most sought-after expansion destinations for both continental and global startups, in Africa.

For instance, Andela is building a pan-African hub in the country, Rwanda has joined forces with California-based startup Zipline to start the world’s first national drone delivery program and it has hosted the World Economic Forum on Africa.

Positivo BGH, a South American technology company, is also building the first ever ‘Made in Rwanda’ laptops in Kigali.

There are several reasons as to why Rwanda is achieving these impressive milestones.

First of all, Rwanda has one of the most amenable policies for entrepreneurs and technologists to get a work permit in Africa, the Rwandan government is among the leaders in e-government service initiatives on the continent and it’s been aggressive on reforming the private sector.

A recent report by Ecobank Research showed that Rwanda has the cheapest internet in East Africa. Uganda has the most expensive.

It has also been named by the World Bank as the easiest African nation to do business in.

It is also the fifty-fourth globally, beating European countries Chile, Luxembourg, and Greece.

According to Mutungi, whose startup has grown from Uganda’s first tech hub, they picked Rwanda for expansion, because they have been “receiving orders from people in Kigali.”

He also sees Rwanda as a “virgin environment” that is building a favorable atmosphere for startups.

If well-funded, he says, “we shall own it[Rwanda].”

Mutungi told me that the company is also planning on creating “more products around distribution and on-demand services.”

Rwanda already has a couple of online shopping sites and they include buyrw.com, expat.com, uzaze, Jumia, yubeyi, Made in Rwanda, and Kasha, which recently expanded to Kenya.