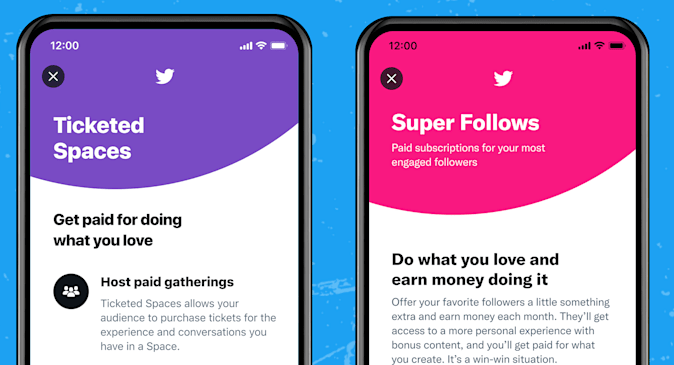 There have been numerous rumours of Twitter working on new monetization features. Much as the app has been free to all users since its inception, talk of Twitter Blue, “Super Follows”, among others have pointed at a paid-for service in the making.

Well, finally, the company has announced that it is opening up applications for Super Follows and Ticketed Spaces. This is in a bid to onboard the first group of testers for the tools.

Super Follows a monthly subscription similar. It allows creators to offer extra perks, like exclusive content, to subscribers for $2.99, $4.99, or $9.99 a month. While it does allow users to essentially charge for tweets, Twitter has said it wants people to get more creative with their offerings. For example, a creator could offer subscribers bonus content and interaction.

What is Ticketed Spaces?

Ticketed Spaces, on the other hand, would be one-time payments to a single event. More like a concert, or pay-per-view event, the feature allows users to charge admission for access to live audio conversations.

Twitter says the price for a Space can range from $1 to $999. The feature also makes Spaces more competitive with Clubhouse, which has started experimenting with payments but doesn’t yet have a ticketing feature.

To apply for Super Follows, users must be 18 or older, based in the United States, have at least 10,000 followers, and have sent at least 25 tweets during the previous 30 days.

How to apply for Ticketed Spaces

Applications for Ticketed Spaces will be open to US-based users with at least 1,000 followers who have hosted at least three Spaces during the previous 30 days.