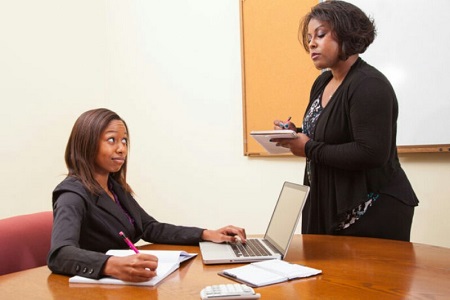 The boss-employee relationships can be “overly complicated” at times, especially when there are unnecessary excuses instead of meaningful results.

Whether you’ve been in an organization for a month or 5 years, your boss (and everyone else) perceives you from what you say and how you behave under certain situation/responsibilities.

One wrong comment or question can change everyone’s perspective about you and even sabotage an otherwise great job.

That’s why it is important that you stay cautious about the words that come out of your mouth, especially when you’re interacting with your boss.

The problem is, there are certain sayings and doings that tell people that you’re immature, incompetent, uncooperative and unproductive – qualities that no boss expects from his/her employees.

Here is the list of ten things that your boss never wants to hear:

Since you’re a part of an organization, you are expected to maintain a polite tone.

Saying “No” to a role or responsibility is a challenge, especially when it’s coming from your boss.

Now, if your boss is asking you to do something and you’re already working on an important task or project, instead of saying “No”, try something like, “Today will be a challenge. Would you prefer I work on this tomorrow?”

“Sure. I’ll try” – many of us think that this is an acceptable response in a workplace, but it’s not.

A boss expects his/her employees to get things done using the best their ability.

Saying “I will try” leaves your boss feeling unsure about your ability to achieve the given deadline.

Yes, you don’t have an answer to every question, but you can always make your best guess instead of saying “I don’t know”.

If your boss actually needs to do the work for you, it certainly doesn’t leave a good impression.

See: Uganda’s Doreen Biira named among 250 most influential biz journalists in the world

This can be a tricky one.

It’s easy to be overworked in today’s thriving industry.

Even when you already have too much work in your to-do list, there are chances that your boss or a colleague might offer you an additional assignment.

In this case, you have two options – prioritize or delegate. Instead of being blunt and saying “I am busy”, you should request a meeting with your boss and help them manage every expectation appropriately.

The first quality that a boss or a company look for in an employee is a “can-do” attitude.

They expect you to show confidence and willingness to take chances. And saying “I can’t” is the exact opposite of that.

See: Nataliey Bitature: How to stay on top of your game as an entrepreneur

It’s a good quality to accept your mistakes and be apologetic about them.

But it will be much better if you could get things right in the next trial.

Don’t make it a habit to mess up and say “I am sorry”.

It’s an excuse and no one likes to hear the same excuse again and again.

The most frustrating thing for any boss or project leader is to spend hours explaining to you what they want and still getting things messed up because you made an error in judgment.

See: Seanice Kacungira: How to deal with a bully client

Of course, there will be times when you might fail to meet a deadline even after considering all possible approaches.

In those instances, you must avoid making excuses by saying “I couldn’t”.

Just do a thorough analysis to determine what went wrong and take necessary actions to get things back on track ASAP.

Giving up is never the answer.

If your boss has given you an assignment whose expected result is nearly impossible, then do some due diligence and figure out the best possible solution.

Don’t be a quitter, be a problem solver.

If you’re held responsible for a task or project, don’t point your finger at others when things don’t work out as planned.

Don’t hesitate from taking responsibility because if you do, eventually your boss is going to blame you.

Norwegian firm commits Shs7.4bn to IT skilling in Uganda