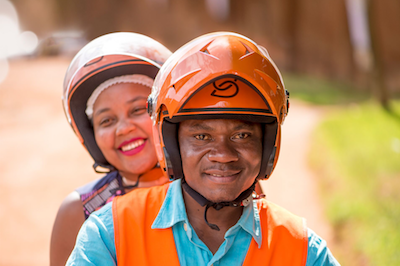 Kampala is a congested city with heavy traffic on almost all roads during peak hours. It gets even worse in the evenings where cars stop for close to 2 hours without moving due to uncontrolled traffic flow.

Due to such, individuals who want to move faster prefer using motorcycle taxis (boda bodas) which can easily navigate through the traffic jam and get one to their destination in a short time.

But previously, boda bodas had become a leading cause of road accidents since they were not controlled and the drivers didn’t have any training on road safety rules until the introduction of hailing apps.

These Apps, including SafeBoda, Taxify Boda, Uber Boda and Mondo Ride have professionalized the boda boda business, by training the drivers on safety and providing a passenger helmet which was never the case in the past.

In this article, we compare the top two boda boda hailing apps; Taxify Boda and SafeBoda.

The comparison will focus on major areas which are of interest to the rider, including area coverage, price, payment methods, and availability. 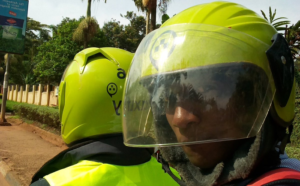 Both Safeboda and Taxify operate widely around Kampala, but the operations of Taxify Boda are limited by the number of drivers on the app

Both SafeBoda and Taxify operate widely around Kampala, but the operations of Taxify Boda are limited by the number of drivers on the app.

SafeBoda has increased its area coverage due to massive signups of drivers who are well spread across the city and its outskirts.

The fares of the two boda boda services are dependent on the distance covered and time taken for the trip to be completed.

They both rely on advanced mapping software for accurate pricing. However, Taxify is perceived to be more affordable as compared to SafeBoda.

This is largely because Taxify discounts all their boda rides by 50% using both credit and cash.  SafeBoda used to give 20% but has since increased to a 50% discount when you pay using credit.

Both Safeboda and Taxify allow cash and credit payments.

Credit on SafeBoda is loaded to the app using mobile money which is widely used in Uganda while Taxify Boda credit is only through a Visa card which is registered in the App.

For every credit recharge on the first day of the month, Safe Boda gives the rider a 100% discount which can be used over the whole month. 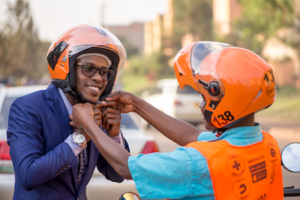 A SafeBoda driver helps a customer to wear a helmet

Taxify Boda offers credit of up to Shs10, 000 for referral of new riders and it is redeemable.

Both Safeboda and Taxify Boda services are available 24/7, and both have free apps.

Taxify Boda however is rare during peak hours majorly because the requests are too many as compared to the number of drivers on the app.

Also, Taxify drivers deliberately turn off the app to make some money from regular riders since the money they are paid by the company is “not enough”

Safeboda, since they have been able to recruit many drivers remains more efficient and more available.

They also recently rolled out a new feature where one can pair with the driver on spot.

Both apps can be accessed using an internet enabled smartphone.

SafeBoda however has an added advantage from its recent partnership with Telecommunications company MTN Uganda where the app can be accessed even without data.