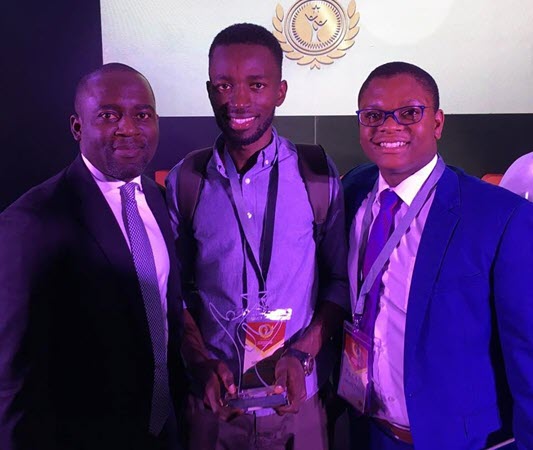 Daniel Mukisa, the founder of Ride Link Limited, a transport network company based in Uganda was Monday honored by Anzisha Prize.

Mukisa was rewarded for being a team leader of Ride Link which has exhibited “revenue growth” in the recent past. The award was presented to him during the 2019 Anzisha Summit which was held in Johannesburg, South Africa.

Sponsored by Mastercard Foundation and Africa Leadership Academy, the conference aimed at exploring and “celebrating excellence and new approaches in entrepreneurship education as well as support for very young entrepreneurs.”

In 2015, Daniel Mukisa launched Ride Link to help Ugandans digitally hail and rent cars and bodas. This was before popular ride-hailing firms like Uber and Taxify, now Bolt expanded to Uganda.

Initially, operating on a Business to Consumer model, the firm has since changed its style of business to B2B.

We just won the Anzisha award for revenue growth this morning here in Johannesburg. Thank you team @ridelinkltd and all our partners for helping us bring this award home?. #workinprogress #thisiswhyweride #mobility4business #forbesafrica #anzishaprize #cnbcafrica pic.twitter.com/L2JZDPSdQb

Speaking to CNBC Africa on the sidelines of Anzisha summit, Mukisa summarized their journey from 2015 to the current state.

“I started bootstrapping with my savings and a friend and it took us three years to get our first investment which was only about USD 2000 and it was in debt,” he said.

“… And being faithful with the little money that we had, and going through the process and getting to the point where the business was now generating revenue… Since then we’ve been able to raise some good amounts of investment,” he added when asked how he’s been able to fund the company.

Last year, for her mosquito repellant soap, Ugandan innovator Joan Lubega won US$12500 (about Shs47 million) after emerging as a second runner-up at the 2018 Anzisha Prize awards.