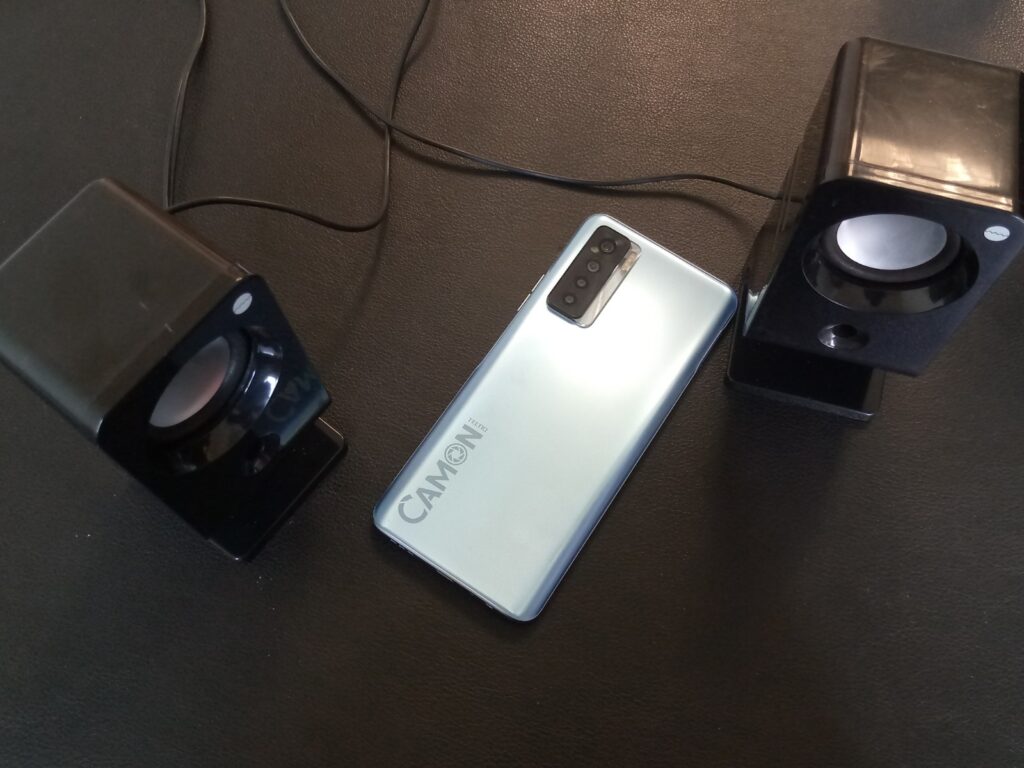 Tecno Camon smartphones have always been about the camera. However, the revolution has kept the trend going up, with performance and ability getting better by the day. The new Camon 17 Pro is the successor to the Camon 16 series, and by all measures outcompetes it.

The Tecno Camon 17 Pro is the first smartphone from the manufacturer to launch with 8GB RAM and 256 GB storage. If you couple that with the fact that this phone was built to be your clearest selfie camera phone, Bingo! You just won the lottery.

We put the Camon 17 Pro to the test to see how it fares, let’s dive into the full review.

The Tecno Camon 17 Pro has a 6.8 inch IPS LCD display that brings out the typical TECNO-look in it when you hold it. We love the fact that it is slim, portable, and a big beauty – a device you’d always love to hold and unlock to use. The top and bottom bezels are slim too and Tecno ensures that the selfie camera hole is small to minimize any distraction.

The LCD display curves to meet the simple plastic frame of the Camon 17 Pro, and this gives it a unique premium look. The midframe is thinner on the sides, while the back gives the phone a sleek side profile making it comfortable to hold. We found no issues with the power and the volume buttons’ position and reaching them wasn’t an issue. 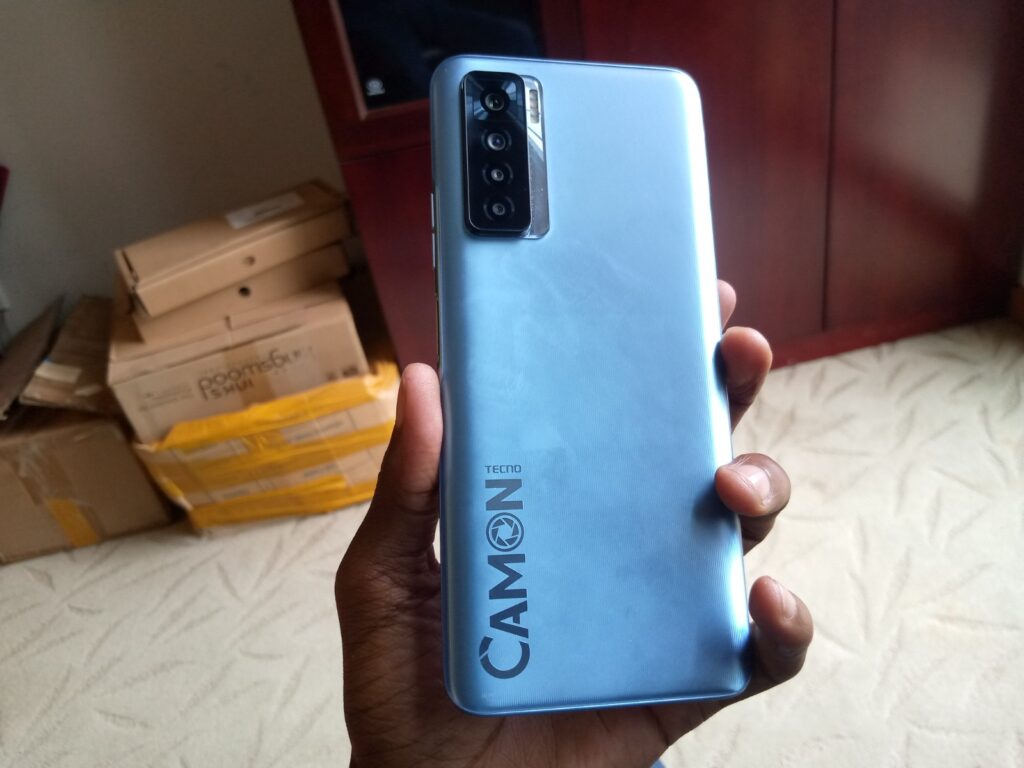 The power button also has a fingerprint sensor on it, in case you want to boost the phone’s security. The left houses the SIM tray which also has a memory card slot to expand on the storage. At the bottom, you’ll find a USB Type-C port, primary microphone, earphone jack, and a speaker.

Verdict: A big screen, slim design, and quite well-positioned rear camera give the Camon 17 Pro a beautiful and unique look. Probably what Tecno should start considering is giving such premium devices some glass on them.

The big 6.8-inch LCD display sports a full-HD+ resolution and has a maximum refresh rate of 90Hz. This makes it fluid when in use and rather fast when accomplishing tasks –  more like a PC in your palm. The beauty about this is that you feel the sharpness of every edge as well as the brightness of every color. The photography you output will have every detail as is, plus gaming and video playing are at their best.

The Camon 17 Pro is powered by the Helio G95 Octa-core Processor with 8GB of RAM and 256GB of storage. We can’t explain more about what this combination has to offer. The 8 core CPU is equipped with HyperEngine game optimization making it the fastest chip yet giving the users exceptional performance. Additionally, the phone comes with intelligent scheduling and balancing features that allow for reallocation of resources to ensure maximum power efficiency so the battery will last longer. 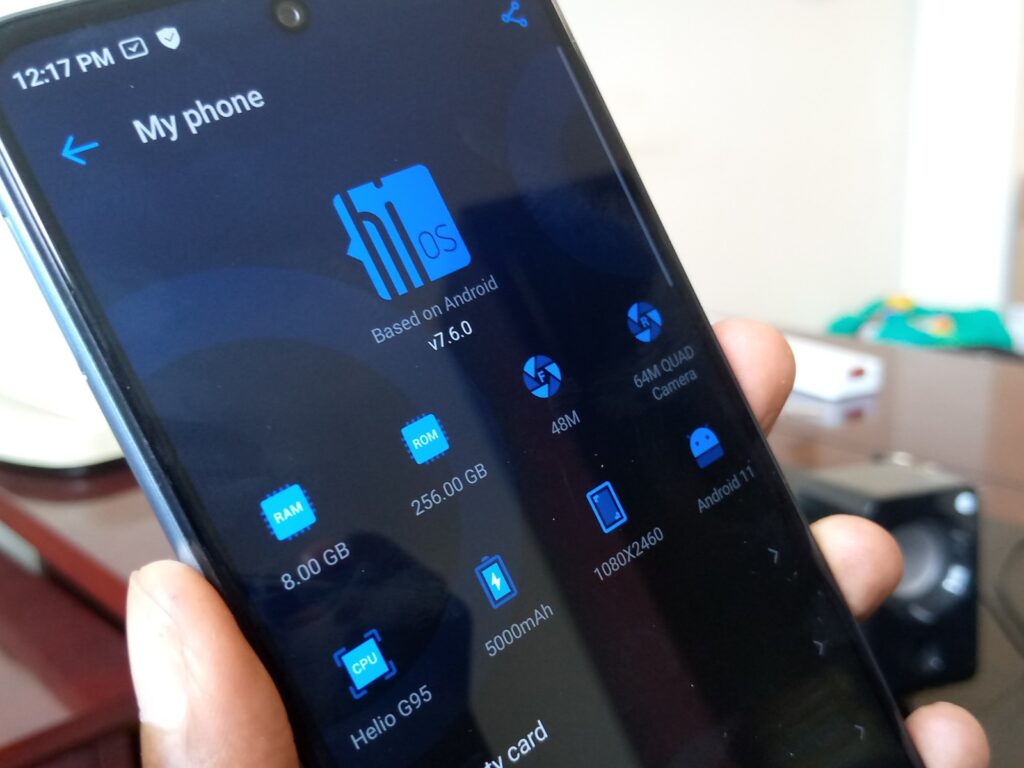 Talking of battery, you get a 5000mAh battery on the Camon 17 Pro which can only make you forget about any drainage issues. Tecno has bundled a 25W flash charger which should be able to charge the phone quickly – juicing up the device in less than an hour.

For the time we had it, the Tecno Camon 17 Pro delivered excellent performance without any lag or stutter. The UI felt smooth and responsive while scrolling through menus. We found the display to be crisp with excellent viewing angles and good brightness. Watching videos on this display panel felt engaging, but a stereo speaker setup would have enhanced the experience further. The side-mounted fingerprint scanner on the Camon 17 Pro is quick to unlock the phone and never needed a second attempt in our experience.

A number of games played on the device ran well. A game played for 30 minutes roughly results in a 9 percent drop in battery life. The Camon 17 Pro was slightly warm to the touch but not too much. If you are looking to play heavy titles, this Camon can take them on quite easily.

Excessive gaming and camera usage tend to drain the battery a bit faster, so you might need to plug the phone in sooner depending on your use. The phone basically lasted for 17 hours and 56 minutes in our HD video loop test, which is decent given the 5,000mAh battery it packs in. The supplied 25W fast charger is capable of taking the battery to over 50 percent in 30 minutes and 96 percent in an hour.

The Tecno Camon 17 Pro sports a quad-camera setup at the back. The primary camera has a 64-megapixel sensor (third from up). This sensor is capable of physically moving to compensate for minor shakes while shooting photos and recording videos. There is also an 8-megapixel ultra-wide angle camera (the first from up), a 2-megapixel sensor for Bokeh photography (second from up), and another 2-megapixel camera for Black/White captures (bottom from up). 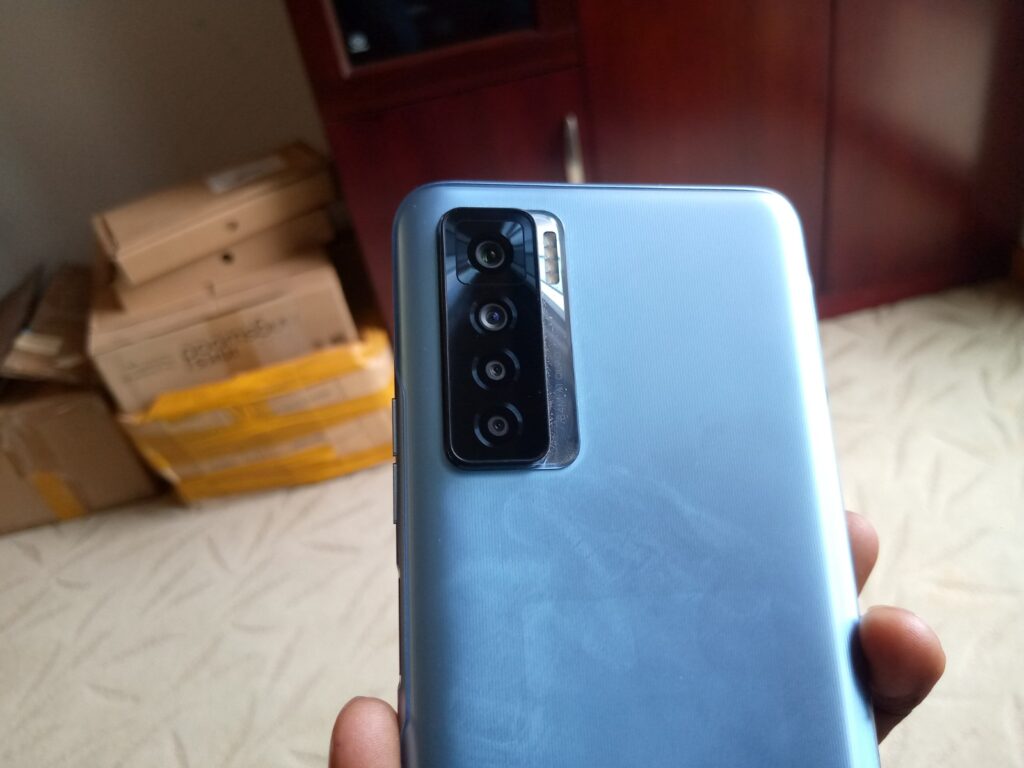 The ultra-wide-angle camera is tasked with shooting macros, and the AI can detect when you are close enough to a subject and switch cameras automatically. Tecno’s camera app is easy to use and you won’t be overwhelmed. The camera has AI scene optimization enabled by default and it is quick to detect scenes when taking shots. 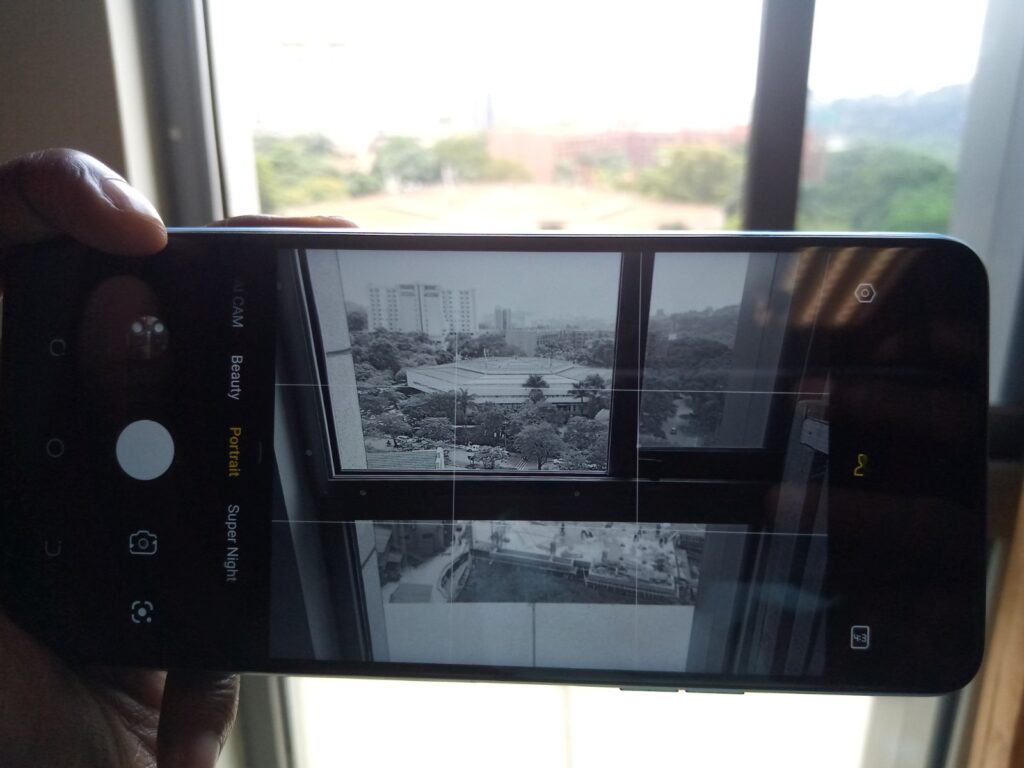 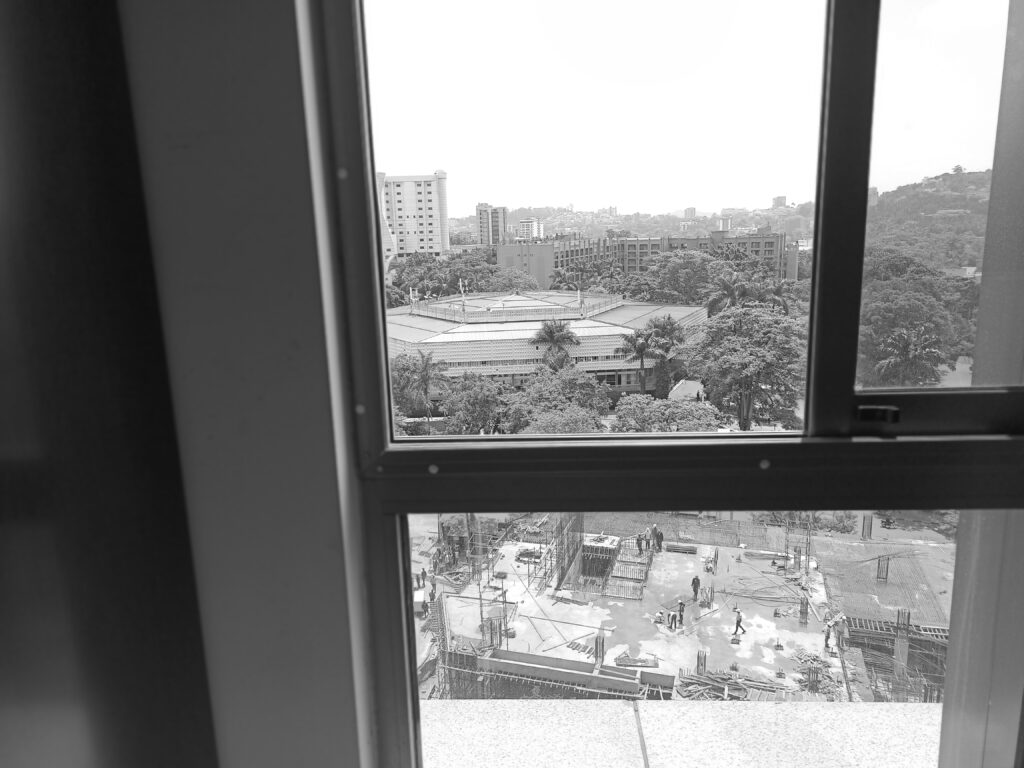 Selfies shot using the 48-megapixel front camera are clear, as expected, in daylight as well as low light. You can take selfie portraits as well, and the phone can detect faces even with masks on. Photos have good edge detection and you can set the level of blur before taking a shot. 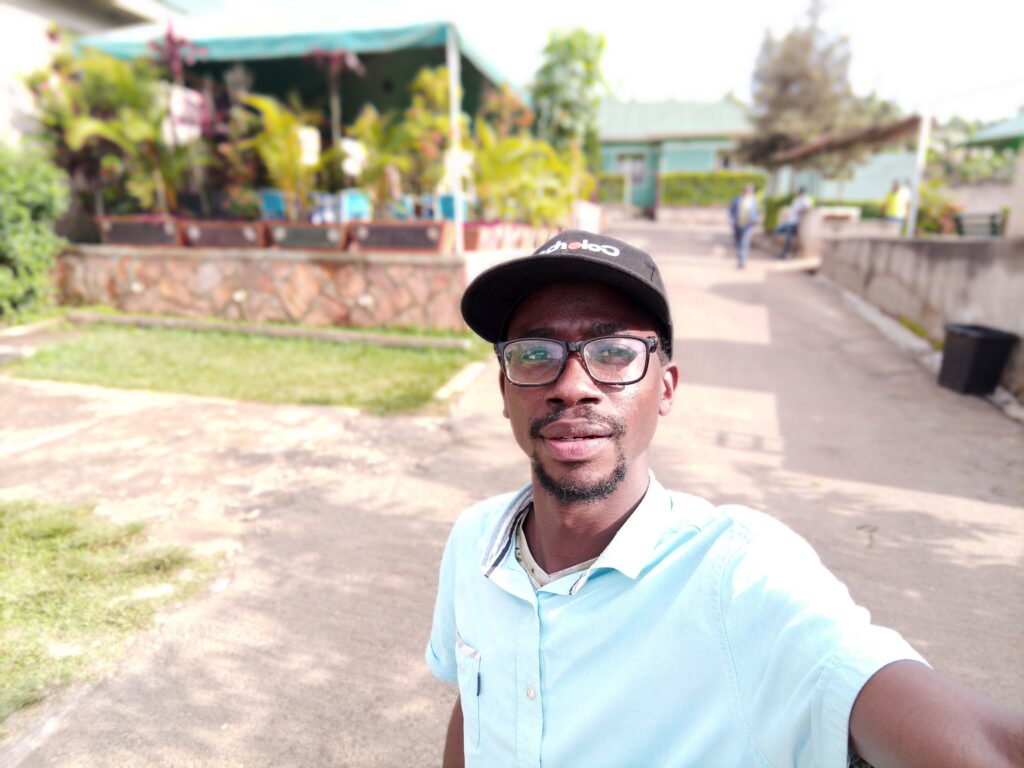 Video recording tops out at 4K for the primary camera and 1080p for the selfie shooter. The Camon 17 Pro can stabilize footage at all resolutions. Even in low light, it does a good job of stabilizing videos.

Verdict: The Camon 17 Pro is a good successor to the Tecno Camon 16 Series, and improves in areas that the latter lacked in. Performance is much better thanks to the Helio G95 Processor. Photo and video quality are also better than with the predecessor.

The main strength of the Tecno Camon 17 Pro is its close-to-perfect camera system which helps it deliver better photography and video performance than the competition. So if you are looking to shoot a lot of video with your smartphone, the Tecno Camon 17  Pro will fit the bill just fine.