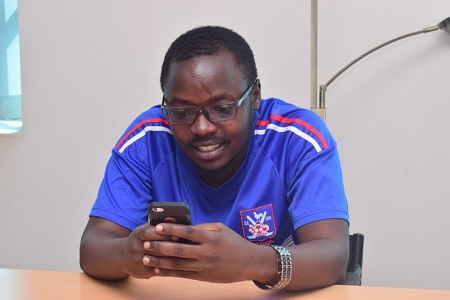 Africell Uganda social media manager Paul Mugume has been named among the most influential technology bloggers in the world by the data sourcing website Rise.Global, using information from Kred, an online social influence measuring tool.

On the list, which includes powerful technology journalists like Sarah Lacy, a former columnist at TechCrunch; Walt Mossberg, the founder of Recode; and Mike Butcher, an editor at TechCrunch, Mugume is ranked number 102.

He is the only East African in this range.

In July of this year, he initiated a searing discussion targeting Kampala Capital City Authority for unveiling terms and conditions that required participants in its innovation competition to relinquish ownership of the products after winning the set prizes.

.@KCCAUG just wants cheap labour to develop a system for them.

Because of being very active on the microblogging site (Twitter), he was among the figures that demonstrated substantial, rising 52 places from his previous rank.

Paul Mugume has reported technology for PC Tech Magazine, Uganda’s oldest technology publisher and ChimpReports, where he started as a social media administrator and rose through ranks to become an editor.

At the time of joining Africell, Mugume had also done social media activities for some of the leading brands in the country like MTN Uganda and Vivo Energy.

Aside from following technology trends, Paul Mugume is also passionate about travel blogging and he chronicles his trips on a personal blog.

Asked Wednesday evening what being recognized among the top technology bloggers in the world meant to him, Paul Mugume wrote to us: “This is a challenge to me because the bar has been set so high and I have to keep bettering myself.”

He added: “But I am grateful, seeing as my work and efforts have been recognised globally. I am looking forward to a better 2018 for me, my blog and for the whole Tech blogging community in Uganda and the whole East African bloc.”