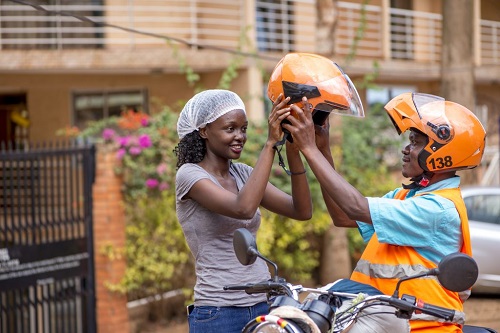 Motorcycle taxi hailing companies are facing resistance in Uganda. In the past few weeks, there have been separate reports of SafeBoda and TaxifyBoda riders being assaulted by their colleagues from the regular boda boda section.

In one brutal incident, several goons pounced on a rider attached to SafeBoda and beat him, destroyed his property, while shouting “we’re tired of you (SafeBoda).”

Now, as we moved around town to find out who is behind these monstrous attacks on digital motorcycle taxi riders, some of the boda boda riders we talked to said it was the remnants of the Boda Boda 2010 Association.

Boda Boda 2010, which in January of this year had its criminal activities finally exposed leading to the arrest of its patron, Abdallah Kitatta, was formed in the year it is named after — after former Inspector General of Police (IGP) Gen. Kale Kayihura, who would later become its so-called godfather, ordered the disbandment of other boda boda associations.

With Gen. Kayihura’s backing, the association took over management of most boda boda stages, assumed a lot of power and even started engaging in political activities. Within a few years, reports starting making rounds that the association had started harassing riders by demanding a lot of money for one to be enrolled at a given stage, they also asked riders to buy identity cards, which would be renewed yearly at a cost. Heavy fines were also slapped on riders who disobeyed rules as decided by the association.

It was on Friday, January 19, 2018, that Kitatta alongside twenty-seven others from the association were arrested in connection to the murder of Case Hospital Accountant Francis Ekalungar. The group was later slapped with five charges, including possession of military property.

Before being incarcerated, according to a February report by the Observer, Kitatta used to tell his colleagues that if even he was taken away, he had groomed enough people to replace him so his power would still be felt in his absence.

“… Kitatta once said that even if he were to be arrested, there would be other Kitattas he has been grooming. Perhaps he knew what was coming and came up with a plan B,” Sulaiman Lubega, the leader of Century Boda Boda Riders Association, then, said.

Muhammad Kasujja, who, quite puzzling, was the secretary general of Century, a rival association to Boda 2010, became the chairman of BIU, which combined several other groups. After joining BIU, Century disowned Kasujja, according to the Observer report. Had Kasujja been planted by Kitatta in Century as a spy? (We were not able to reach Century for comment but we talked to Kasujja whose group is believed to be the brainbox of these attacks.)

‘They are undermining us’

In our lengthy phone conversation, Muhammad Kasujja repeatedly denied his association being behind the attacks on digital motorcycle taxi riders. However, he clearly indicated how he loathes ride-haling companies and how he is determined to fight them if they don’t meet his demands.

“That’s not true and we’ve no problem,” he said when asked whether it’s BIU facilitating the attacks. According to him, the digital boda boda riders who are accusing them “could be having other intentions, for instance, getting media attention.”

He passionately condemned people behind the attacks, urging “all my fellow colleagues to know that their enemy is not the digital motorcycle riders, but the people who brought ride-hailing companies.”

According to Kasujja, ever since these companies launched in Kampala, they have fundamentally disrupted the system of the boda boda industry. For instance, Kasujja says, boda boda riders attached to ride-hailing companies no longer follow boda boda stage rules.

With the ride-hailing system, boda bodas pick passengers from any location, which, according to Kasujja, affects their counterparts on stages, who are always there waiting for passengers.

This, he says, has reduced the rate at which they work, consequently affecting their income. Passengers are now also more attached to ride-hailing companies since their fares are less compared to the normal bodas. Kasujja also doesn’t like this idea of companies subsidizing costs.

He even wondered where they get “this money to top up for riders from.” In the conversation, Kasujja said he had met with SafeBoda and was planning to meet Taxify soon. But one wonders why he didn’t ask SafeBoda to tell him that they have investors who are helping bankroll these promotions meant to woo customers.

Maybe, it’s because he went with an already ‘poisoned’ mind. According to him, when these companies unleashed these promotions and incentives to attract riders, he knew it wouldn’t last. And, he said, his thinking was right as some of his friends have already quit because some of the companies removed the incentives.

Though it’s actually true that some of the riders are already having issues with the companies they are working with, they also know that there are multiple advantages to joining a ride-hailing company.

This week, Muhammad Kasujja told this website, that he is launching a campaign where he’ll be exposing the negative impact of ride-hailing companies in the boda boda industry.

Kasujja, who believes there’s more harm than good to the digital revolution, says he’ll be conducting rallies and stage-per-stage visits.

As he conducts these campaigns, he also wants the ride-hailing companies to meet leaders of boda boda associations so they can discuss how they can work together, if at all, it is possible.

Is Kasujja hiding something?

At the time of founding BIU, the Minister for Kampala Beti Kamya and then Security minister Lt. Gen. (retd.) Henry Tumukunde had announced plans of having all boda boda associations under one group. In Kampala, being a leader of a group of people like boda boda riders, who are mostly youths, puts you in a position where most government leaders want to keep you close. And this has been a history with the past boda boda associations which have been used by security agencies in spying on criminal activities and politicians in mobilizations.

Some of the most senior government officials who have been linked to powerful boda boda organizations are Gen. Salim Saleh, Gen. Kayihura, Gen. Tumukunde, Kampala Capital City Authority (KCCA) Executive Director Jennifer Musisi and Kamya among others.

When asked if his association is backed by any godfather, Kasujja was quick to dismiss the idea, saying that he has seen his colleagues who have worked with godfathers and instead of doing boda boda work, they focus on doing what the godfathers want them to do.

BIU is currently headed by a committee of 11 members and sub-committees at divisional levels.

Are associations helping boda boda riders? In the interview, Kasujja talked of how they’ve helped riders get access to medical insurance, scholarships to children of boda boda riders through partnerships, setting up savings schemes among others.

But you’ll hardly find a boda boda rider who says anything positive about these associations. They only talk about how they always impose random charges to fulfill own (leaders) interests.

These associations are so powerful that they have at times frustrated projects initiated by the government. For instance, in 2013, Boda Boda 2010 put up enough resistance to disable the registration of boda bodas in Kampala.

When asked about why they rejected the registration of bodas, Kasujja told us that KCCA’s proposal was unactionable. While KCCA wanted to be in charge of the registration process, boda boda leaders also wanted to take over the role since, according to Kasujja, they are the ones who know the riders.

While this sounds convincing, there is also a possibility that they wanted to get bribes from riders before they could allow them to register.

Meanwhile, after learning about the fights, IGP Okoth Ochola directed his commanders in Kampala to ensure the riders are protected from goons.