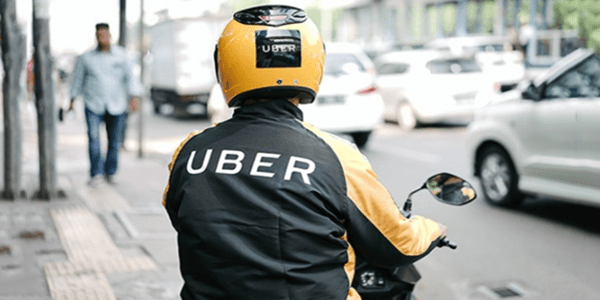 Competition for both drivers and customers is getting tighter each day among the hailing apps: Uber, Taxify and SafeBoda.

Whereas SafeBoda specialized in the boda boda sector, it was joined by Uber on 29th March, 2018 and Taxify in 9th February, 2018 after the international giants realized they could generate more revenue from the same industry instead of operating only cars.

This has left the companies battling for not only customers but also riders. Some users have also reported cases of ordering Taxify rides and only for the rider to appear in another company’s uniform (SafeBoda or Uber.)

To add more riders to their service, Uber has developed a new strategy through a program called uberDost where anyone can earn by referring a new driver to this app. This was announced via a tweet from the company’s official page.

Uber is giving you an opportunity to earn by referring all your boda drivers for #uberBODA through UberDost. You will be eligible for payment for each new driver-partner (uber X or uberBODA) you refer.

Anyone — be it a student, worker is qualified to participate. Applicants are required to fill in this form in order to obtain their information such as bank account details. However, the program is restricted to Android smart phone owners who can download the uberDOST application from this link.

Participants will earn after a new driver/partner (car or boda boda) they refer to Uber has completed the required number of trips. The number of drivers one can refer is open.

According to Uber’s country manager Aaron Tindesiga, Dosters will be paid “Shs50,000 for every driver invited and the new driver gets Shs75,000 upon completing 10 trips – all drivers with must have valid driver permits and those that do not have Uber pays for their driving evaluation and drivers permit.”

There will also be not deadlines for one to meet when they sign up for uberDOST. You can simply work from anywhere, at your own convenience.

Shifting to customer’s side, Uber has re-embarked on the 50% discount off its uberBODA rides, a promotion it had earlier on held in mid-April this year. This comes at a time when the hailing apps are in a cut-throat completion following SafeBoda’s launch of the same promo on 1st June. 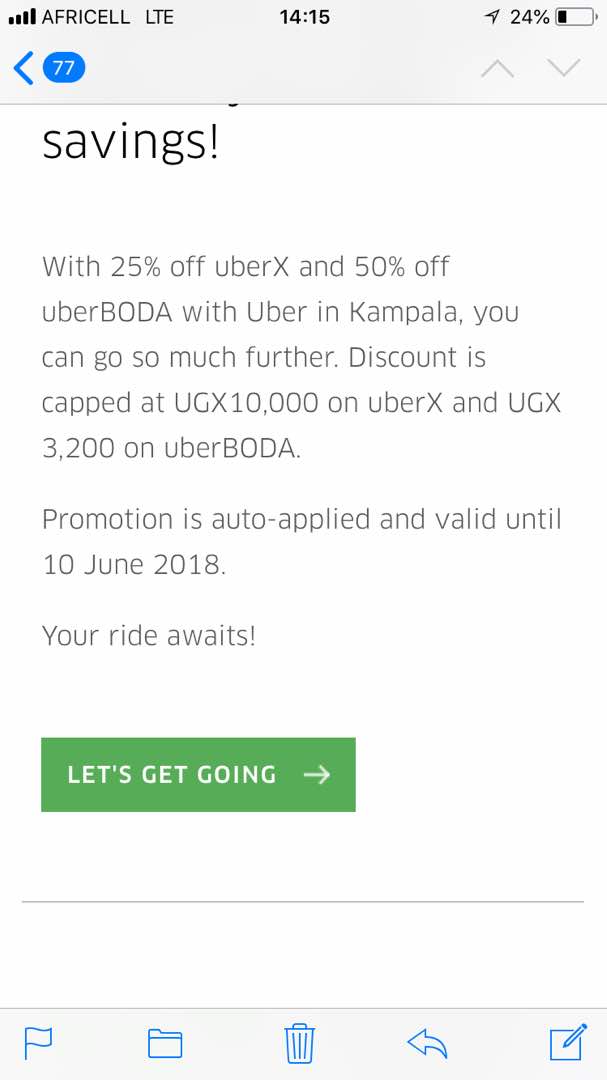 Unlike its competitors, Uber’s half-price promotion, which will expire on 10th June, 2018. (SafeBoda’s promotion could last a month and the one of Taxify may still be around.)

The Uber promotion is limited to the number of rides and amount of money a customer spends; a 50% discount is given on each of the four (4) rides during the promotion period.

With this promotion, customers will get a 50% discount on only 4 rides. The discount will only cover a maximum of UGX 3,200 each on each these 4 rides which implies that  the total cost covered under the promotion is limited to UGX 12,800.

For those who use taxis, the dynamics are the same, only that the discount is at 25%