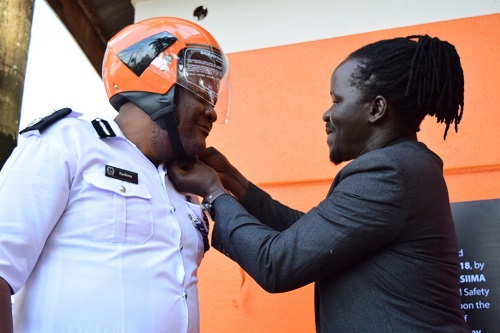 Kampala Metropolitan Police (KMP) Spokesman Luke Owoyesigyire has said that security operatives are on the ground to find out what could have fueled the recent attacks on SafeBoda riders.

In the past two or so weeks, there have been reports of boda boda riders in the digital section of the industry being attacked by their counterparts riding ordinary motorcycles.

According to SafeBoda, at least ten riders attached to their company have been attacked.

One of the attacks that happened last week but one attracted the attention of the Inspector General of Police Okoth Ochola who said he had ordered police commanders in Kampala to ensure that the riders are protected.

Speaking to NTV recently, Ricky Thompson, one of the SafeBoda founders lashed at people who were attacking their riders, saying they were acting illogically.

“You can’t beat people; it’s time that people use logic,” he said, sounding agitated, then added: “Do something better than what I am doing”

The attacks of riders in digital motorcycle taxi services have been linked to multiple groups, including heads of associations of boda boda riders, who find their relevancy threatened since riders are abandoning traditional associations to join Uber, SafeBoda, Taxify, and DialJack.

Though they have denied being involved in the attacks, they have firmly shown their resentment of the ride-hailing companies.

Some have even launched campaigns against ride-hailing services.

‘SafeBoda is doing nothing’

According to him, for the all the time they have been in the country, digital motorcycle taxi services have not done anything to support the sector, but they are instead focusing on “purely doing personal business” that “adds nothing to an ordinary boda boda rider.”

“SafeBoda has been here for about three years but within the struggles of streamlining the industry they’ve contributed totally nothing,” he said.

Nothing will stop SafeBoda

Meanwhile, Ricky Papa Thompson has said that no one is going to disrupt their vision of transforming the boda boda industry in Africa.

“Our journey has just started as SafeBoda; we want to change the entire boda boda industry not only in Kampala but across Africa,” said Thompson.

SafeBoda is currently operating in Kenya and Uganda, and Thompson has recently said they are planning to expand to more countries.