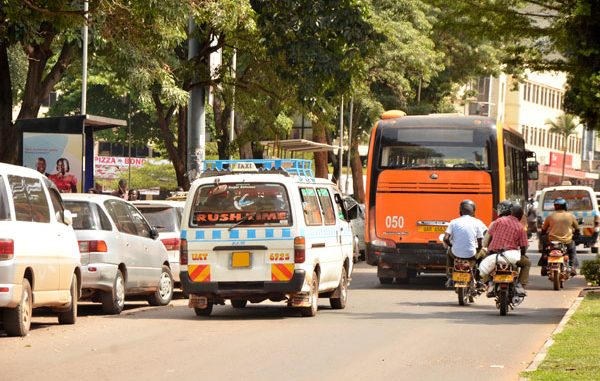 In 2015, Kenneth Bintu’s friend was robbed at knifepoint. Bintu’s friend had boarded a Taxi headed to Busega, a Kampala suburb, not knowing that it was occupied by goons.

A few kilometers from the boarding point, the Taxi changed course. With a knife pointing at Bintu’s friend, the thugs asked for his money and all valuable belongings he had boarded with.

If you are reading this and have stayed in Uganda for a while, it really can’t be news. But to Bintu, the incident was quite shocking since he had been away from Uganda for some years.

A number of horrible things, including rape, kidnaps have been conducted in Ugandan Taxis.

Taxis are a popular means of transport in and outside Kampala since they’re cheaper than other available options.

When Kenneth Bintu saw what happened to his friend, he went out to conduct research and after combing through available data and talking to players in the taxi business, he realized that most of the evil deeds by carried out in the sector were being done because of lack of a monitoring authority or tool.

Against that background, Bintu shared his findings with his three colleagues and they decided to develop an application that would help in monitoring public transport services in Uganda.

Kenneth Bintu and his partners are students of Information Technology at Cavendish University Uganda.

The quartet has developed an application called Public Taxi Uganda through which authorities, car owners and passengers can track movements of Taxis.

The Public Taxi Uganda app can be downloaded and used by anyone with an Android phone.

On the app, details of a Taxi are added such that a passenger knows the vehicle they’re traveling with. The process is similar to what you see with ride-hailing services, whereby when you request for a car or motorcycle, the number plate of the ride is displayed and the driver’s name.

But the Public Taxi Uganda app is not a ride-hailing service. The founders want to create a database for cars in the Taxi business so that you’re aware of the people transporting you.

They want you to feel safe when using public means of transport.

This will also help you recover your property in case you forget it in the car. And there are fewer chances of a driver or conductor harming you since you already know their details.

In March of this year, President Yoweri Museveni received a report from Mr. Jean Todt, the United Nations Secretary-General’s Special Envoy for Road Safety, indicating that the country was losing 10 people to road traffic accidents daily.

Uganda has also been rated among the top or leading countries in road traffic accidents (RTAs) or incidents (RTIs) in the world by the World Health Organization (WHO) road safety assessments.

Recent reports have shown that in the last decade, the recorded road crash fatalities in Uganda rose from 2,579 to 3,503 in 2016.

But most important of all is that most of these accidents happen due to driving errors. The poor state of roads in the country contributes the least to RTIs.

RTIs are a global concern and WHO estimates that 20 million deaths will occur by 2015, leaving 200 million injuries. The WHO predicted that by 2020 road deaths would become the number four killer, behind Aids, heart disease and suicide.

See: Kenya’s Little Ride to face off with Uber, Taxify in Uganda

So, by getting Taxis into the system, Public Taxi Uganda anticipates that drivers will start taking precautions since they know they’re being monitored.

The application has a monitoring system that helps the owner of the Taxi or traffic authorities to monitor the movements of the car.

It is possible to improve the discipline of drivers since it has been demonstrated by companies like SafeBoda, who have put in the time to train their riders.

If you’ve been traveling by Taxis in Uganda, you know how most of them disobey traffic rules and treat cops with disdain so it won’t be easy for them to welcome an idea that wants them to own driving permits, avoid taking shortcuts and buy smartphones.

Most of the above issues are what has made it difficult for ride-hailing companies to attract drivers.

Because of the above, for Public Taxi Uganda to work, the founders have to pitch it to the government so that they can enforce a law directing drivers to be on the system. It would also enable it to scale faster since the government would facilitate sensitization campaigns and deploy enforcement officers.

Kenneth Bintu told SautiTech that he has already pitched the idea to the relevant ministries.

Bintu made the project known to the Minister of ICT and National Guidance Frank Tumwebaze through Twitter. Tumwebaze, in turn, directed him to Kenneth Bagarukayo, the coordinator of National ICT Initiatives Programme.

NIISP recently announced the second phase of the programme, calling on innovators to apply for the government innovation fund. Bintu now has to wait and see if his idea will be bought by government.

Without government support, it will be really hard for Bintu and partners to navigate all the barriers in the Taxi business in the country to realize their dream even if they got a strong private funder.

In brief: Tumwebaze denies investing in OneCoin; innovators in Uganda to be registered