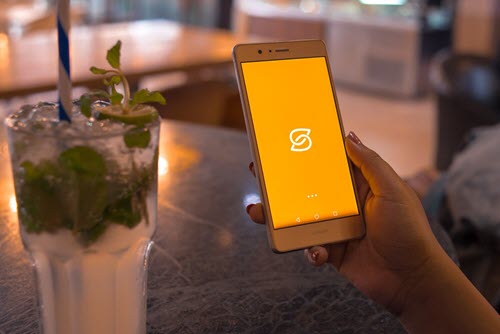 One day in 2014, a group of five boda boda men hit Kampala streets, but unlike other days, they had each added something to their work essentials: two shiny orange helmets, one for the passenger and another for themselves, a reflector with their own name on the back, and a smartphone with a Safeboda app installed on it.

With Ricky Rapa Thomson, a co-founder and ex-boda driver, and these five men, now referred to as SafeBodas, on the road, it would mark the beginning of a crucial transformation in Kampala’s digital transport sector. And more importantly, a huge transformation in these men’s lives.

As these men waited with their phones on Kampala roads, a group of engineers and other staff sat in a small room in Kyebando, to ensure that the ‘quintet’ put the smartphones to good use.

Moses Musinguzi, who on that day, wore helmet no.001, now sits in the current SafeBoda offices standing on the first plot of Bukoto Street in Kampala.

Here, with his experience as a SafeBoda rider, working alongside other ex-boda drivers oversee a number of activities such as recruitment and training of new SafeBodas.

On August 30, 2018, SafeBoda reminisced about the day they launched in Kampala via social media.

To their thousands of followers, they tweeted: “#TBT to where it all began. SafeBoda was founded in Kampala 4 yrs ago to improve the lives of both riders & passengers by increasing the number of safe trips taken per day.”

Went on the tweet, underscoring their growth: “We’re proud of how far we have come on this journey & our growing community of over 5000 trained SafeBodas.”

As the time of posting this tweet, which has since been retweeted by 40 people, liked by 167 tweeps and responded to by 9, SafeBoda was coming out of a thorny spell, which had been partly engendered by a tough choice the company had made 2 months ago.

In June, SafeBoda declared on social media that it was soon launching in Kenya.

The expansion to Kenya, according to Alastair Sussock, one of the three founders, was to test if the Safeboda app could work in multiple countries, as we’ve seen with other ride-hailing companies like Uber and Taxify.

“Kenya was the real internationalization to show … can we make the app work outside Uganda?” he said recently as we met at the SafeBoda headquarters.

By doing this, SafeBoda, Sussock told me, wanted to test how fast it can scale in two countries across East Africa, making sure it could grow in Kampala while launching in Kenya.

However, in this time of gaining huge traction in Kampala and starting the Kenyan market, some tweeps started sending out tweets, claiming that they are being overcharged by the app. The overcharge varied in value, with some cases, almost quadrupling the usual fee.

Ali Ziwa, born and raised in Kampala, is the lead of the iOS engineering team at SafeBoda. According to Ziwa, during “the period of scaling”, SafeBoda was fast-gaining users, prompting the company to transfer the system to another platform to accommodate the surge.

In the process of “migration”, that’s how the technical glitch that caused the overcharge bug arose, Ziwa told me. SafeBoda has since refunded the people who were affected.

Another malfunction also hit the app in the month of July during the period of rapid scaling, sparking some complaints. SafeBoda has a feature called ‘Pair’, which helps passengers to hail a boda that is nearby instead of making a random search.

But when some users would try it out in July, it would indicate that there was no SafeBoda nearby yet there were multiple riders around.

Some felt riders were deliberately turning off the apps. Though this actually occurred, and SafeBoda on numerous times assured customers that such riders would be summoned, there was a bigger technical problem.

Passengers would approach the SafeBodas, see them interact with the application, but the pairing function would fail to work.

According to Ziwa, the problem here was with GPS tracking, i.e. the SafeBoda driver app would always lag behind, whereby you would find a SafeBoda at, say, Mapeera House being located at Bank of Uganda headquarters.

For one to pair with a SafeBoda, they have to be a maximum radius of 500 meters.

As a solution to the above, Ziwa says they have customized the driver’s app; instead of tracking them using Google Maps, they now have an in-house product called ULU used to monitor the SafeBoda driver app in case of any challenge.

We want to build the best technology company in East Africa

One thing Sussock has acknowledged is that SafeBoda, just as any other startup, will always encounter challenges. Even Uber, a global leader in the ride-hailing business, has hit major technical setbacks, as it expands.

“SafeBoda will always have challenges; anything that’s new comes up with challenges,” he told me.

Their focus is to think of how SafeBoda can move from not just transporting people but other things like on-demand services and other services that boost the welfare of drivers such as savings, loans and insurance and improving payment options for passengers as well.

He noted this will require working with other startups in the country. “If we grow the technology presence in Uganda, it’s a win-win for everyone,” he said.

Read also: How Ugandan startups could be failing themselves

The nucleus of any tech-based startup is the engineering team. If you have a shabby engineering team, with the current race in innovation, you can’t keep up with the competition and ever-growing cyber challenges. Agile development means continually releasing new versions of a product every 2 to 4 weeks – this is the followed convention.

SafeBoda is investing a significant portion of its resources in bolstering its engineering team. One big challenge SafeBoda is facing is that there are not always enough top-level engineers in Uganda to meet the latest tech challenges.

Read also: Uganda has the most expensive internet in East Africa – Report

While powerful startup hubs like Silicon Valley are also short of developers, in Africa, because of poor infrastructure and resources, the education system doesn’t always produce the best quality of developers. This problem is prominent even in Africa’s most productive nations startup-wise, including Kenya, Nigeria, and South Africa.

SafeBoda has been hunting for engineers since the start of 2018. But they are yet to get even a quarter of the number they want. Sussock says they would prefer to have all the engineers coming from East Africa and sitting in Kampala.

But the current engineering team of SafeBoda is made up of 10 people, with four from Kenya, other four from Uganda, two from Ghana and one Nigerian.

The company operates three apps; two Android-based for riders and passengers and one iOS-based for passengers, rolled out in September 2017 and operational tools as well.

The ten sit in Kampala and once in a while, visit Nairobi to see the product there. This team has to ensure that the apps keep running efficiently, including updates that happen at least once a month. They are also planning on adding new features to the app.

SafeBoda uses Kotlin (Android) and Swift (iOS) as programming languages. One of the reasons they’ve failed to get developers is because of Kotlin.

The language first appeared in 2011 but it was in 2017 that Google announced it was making it the first language for writing Android apps.

Kotlin’s primary sponsor is JetBrains, the company behind tools like IntelliJ.

It’s 100 percent interoperable with Java, which until now was Google’s primary language for writing Android apps (besides C++).

Google’s own Android Studio, it’s worth noting, is based on the JetBrains IntelliJ Java IDE.

Because of being a new language, most university graduates around didn’t study it, much less had enough time to learn it on their own.

At Makerere University, the programming languages offered are C, PHP, JavaScript, and Java. They are, however, fundamentals, and can help anyone self-teach the others.

Ali Ziwa taught himself to program with Swift.

SafeBoda is taking two approaches to deal with the problem of a shortage of engineers. One, they have decided to open an engineering hub in Barcelona.

According to Ziwa, Europe was the last resort after failing to get people here.

The other strategy they are using is to train some of those engineers that are willing to work with them. They recently enrolled some developers, including students and those working with Ugandan corporate companies to skill them in Kotlin. About ninety people enrolled, and thirty-two cruised through the end.

It is from these that they hope to pick some people for internship programs.

Riders and the Academy

This past month SafeBoda opened a training academy in their original home in Kyebando to foster the professionalization of the boda boda industry.

The discipline of SafeBodas has of recent been under scrutiny, and this large space, which can accommodate close to 1000 riders, will help in retooling these riders with knowledge in customer care, app handling, and safety skills.

According to Eunice Among, the Head of Customer at SafeBoda, new riders will also be trained from here. The academy has the support from the relevant government ministries and Red Cross, according to Among.

She told me they want to build “a great community of trusted boda boda riders with a better income” so that a Ugandan company can dominate one sector of the East African market.

On top of a huge staff that sits at both the company headquarters and the SafeBoda Academy, the company also has a team of eight people that move around town daily to check on how the safe riders are progressing in the field, Among told me.

Despite the challenges, when you meet officials at SafeBoda and from the conversations I have heard with multiple of them, including SafeBodas, one thing is clear, they love the company and they are working hard to see it grow.

But as I left the SafeBoda premises on the day of this conversation, I kept asking myself how SafeBoda will get around the challenges in the technology space that have shaken up even bigger platforms.

On September 28, a few days after my conversation with Sussock, the technology critic James Wire tweeted asking: “@SafeBoda why is your app insisting that I must log in with [G]oogle or [F]acebook before use?” This was just a few days after another data breach that affected more than 50 million users had rocked Facebook, which now faces a fine of 1.6 billion euros in Europe.

In his tweet, Wire wanted to know why SafeBoda insisted on having users’ private information accessed by the SafeBoda app, yet they (users) are already skeptic about their safety with those very companies (Facebook and Gmail among other networking sites), instead of using a phone number.

Read: Horrifying reality of what happens when you give an app access to your camera

.@SafeBoda why is your app insisting that i must login with google or facebook before use?

For now I'm off the service till you rectify that. Who told you we all use those platforms?

SafeBoda assured the people who reacted to that tweet that they will be adding the phone number sign-up option in the coming version of the app.

Good morning, apologies for that, we are already working on making phone numbers a sign up option in the SafeBoda app. The next app update coming very soon will has this feature added. We can guarantee you that.